Today was a day for walking, no matter what the weathers opinion was.

We had the kit, and was ready.  Rain and cold were promised, and thus we prepared. Over trousers, boots (always) waterproof coats, walking trousers, hat, gloves, fleece, sandwiches,
walking stick and enthusiasm.

10 minutes into the walk and the fleece came off, as did the jumper – I was boiling, and it wasn’t even really up hill.  It was a bit uphill, but really not that much. Admittedly, there was more mud than anticipated, but it was rather more the humidity and being in a sheltered valley that set the scene for the next couple of hours. And the on – off rain.
Now, I have done the Lathkill dale before.  Well, I say that, I have done the bits at the Monyash end. It starts out pleasant enough, but then develops a mind of its own, where a perfectly sensible path becomes an gymnastic exercise of messing about between boulders.  This time, starting from Alport I expected something a lot more gentle to start with.  The map hinted it would be thus.
In theory it was.  Levelish, easy to follow, nothing too arduous.  However, I was expecting the paved

nonsense of Dove Dale, or the firm gravel of Mill Dale or Cressbrook Dale – it was not so.  Rather, a mud-fest especially due to the recent snow melt topped up with the previous nights precipitation. As such, the grip on my boots was tested and found wanting.

A narrow path to start with, hemmed in by barbed wire and dry stone wall and civilised, it then broke out into some fields.  Whilst these looked green, the previous nights rain had maximised the efforts of the mud to render boot-tread pointless, that and it was the introduction of speciality climb/squeeze stone styles that are popular here abouts.

I will stop moaning, because it was lovely, and the river is an absolute joy of clarity, sounds, movement, freshnesh and sheer life that is it is hard to chrulish about it.
Thus the route continues across field for a while, and after a short stretch of wood, we encounter a road. Over the beautiful old stone bridge to the other side, and off we go again.  On the other side of the river, we are suddenly onto gravelled excellence for a

few miles. Here the river takes on a very much more managed look.  Weirs aplenty, presumably for the encouragement of tasty and expensive fish to be grown and angled.

This was where we saw out first Dippers. I have seen them before near Litton, and they are entirely enchanting.  On the river, they look for flies and other waterborne victuals.  They stand on rocks in the river and have this beguiling bobbing motion that defies all explanation. We saw many more, and they bring me such joy.
The walk carries on leisurely for a little while, until a gentle rise in the path hides the trauma ahead.  The path suddenly starts to decend over foot-polished limestone.  Not normally a difficult mission, but slick with rain, should be treated with caution, as the relationship between walking boots and worn rock is not always a happy one.
On the path goes, until we were intersected by a track to Over Haddon.  It was too far up and too early to divert for tea at the pub, and I believe the tea serving place was not open at this time of year.

We continued, as did the rain.
We were, admittedly,  starting to get fed up with the trudge.
It was not the location, but the weather.
Wet and chilly, but the walking made us warm.  I had thus far taken on and off my over trousers a few times, for the weather then to do the opposite of what I was clothed for: off they came and the rain started, if with them them and so it began. That was the relationship between waterproofs and the rains.
So I left them on, as at least they were defence against mud!
Lathkill dale enters then what I can only describe and a bucolic area of post industrial recovery.
On the surface it looks incredible, and the wildlife diversity factor is without fault.  however, there

are certain areas where, if you look, you realise much is afoot.  All along the valley there are weirs, some times for long gone mills, (definitely saw some mill stones) some times perhaps for mine pumps, or rock crushers, many I guess for trout or salmon, there are springs and places where bits of the river mysteriously gurgle into solid ground!

There are too areas of mysterious ground and holes that potent danger!
Thus we continued, enthralled by the beauty of the landscape, the music of the river, the Coots, Mallards, Swans and dippers, ferns, trees, mosses and lichens, however, by now really damp, annoyed by the rain, and a little worn after a couple of hours non stopness, we plodded on.
We sat on a log and ate a roll.  The rain stopped, and the day showed promise.
Off we went, but I cannot say there was a spring in our step.  Often the easy path that summer visitors enjoyed was rather too often somewhere within the river.  It was good to see the river in full chat, and I was glad of the boots, as more than once I followed the path through several inches of river depth for some distance, but sometimes it involved a diversion inland.  The path also became

more troublesome, twisting and full of boulder and roots, which meant less looking at scenery, and a lot more observing of where you feet were going to go.

It did get tiresome.  But still very worth it.
Eventually, we hit upon the bridge that led to Cale Dale.
Now, whilst this is not the Alps, this is a path that should not be tinkered with in the wet.  Not dangerous as such, but taxing and very, very worth it.
We set off, and one prize along the way was to see what was quite a major stream issuing with some force from the side of the hill. The most beautiful, crystal clear springwater gushing with great velocity from a place somewhere below the path. There was a way down to this, and a large part of me wanted to go down to inspect, but the reality part of me had words with it and we continued along our way.
The great thing about Cales dale is that several path run through it – one up it and one across is, and neither are easy.
The one up it is not too bad, the route to Monyash is adventurous, but worth it (includes a random Christian shrine).

We headed to Youlgreave, up what seemed to be a flight of stone step heading on for ever.
Only a few days ago I trampled up Monument in London, 331 steps up 160 feet, and I think this was equal, if not slightly more.
Trudged up we did. However, once at the top, you are back onto the the limestone plateau that is actually the major constituent part of the white peak, the Dales being the exception, the incision into the limestone world.
There was still some more up hill.  Now gentle, but with some mud.
Glad to be on top, the spring sort of returned to our step.  It didn’t last long.
We tramped across several meadows, gradually going up. Through plenty of mud and up hill until we got to a farm.
This farm was circumnavigated, via an intensely muddy field, until out into open fields that were just pretending not to be moor. In open fields we had joy as we saw a plantation in the near distance that was the last bastion of wilderness before properly aiming for base camp, however, there was treachery afoot here!
In the summer I suspect it is a perfectly aimiable field, a reasonbly worn path across it – however, experimnation with the stick showed that this path was a one point nearly a foot deeper that its grassy but watery surface looked, and experimenting with a booted toe bore this out – a diversion was afoot, sought and executed.
Finally. we hit upon a road, and took the small minor road to Youlgreave.  This was a delight, all tarmaced , no vehicles and all gently downhill, just the boon we needed.
Good time was made.  There was a small issue of the flooded section, but although several yards long, I discovered a route through that was less deep than my boots. I chose not to mention my wife’s antic in trying to avoid the flood, which started benignly enough, but was an entire adventure of its own!
The village of Youlgreave was entered with something approaching delight. I took the waterproof trousers off with a performance that made me look  at least 15 years older than I’m am.
We stopped at the village shop and was impressed by their inventory.  Especially of note was the little Deli counter, and the local Hartigton cheese was brought from it, as was some local beer.  The cheese is most excellent.

The George Hotel added even more joy with a welcome sit down and a couple of very good pints.

Thus we trampled back to Alport, and back up the hill to a shower, and a proper sit down, the beer from the shop, and some sausages she acquired from a butcher in little Eaton the day previous.
What an excellent day!


Check out my ViewRanger track for this walk – total distance 9.82 mi

Since writing this, I have discovered this excellent little video on YouTube on Lathkill Dale 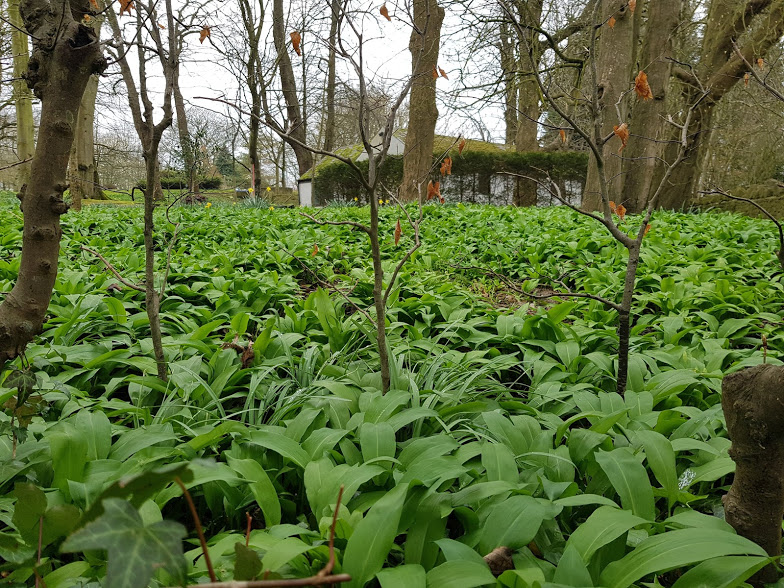